This article is a way to give you an answer to one of the most frequently asked questions on DR. How did you manage to create the lightsabers? That's why We have decided to let you know something more about their creators. Roberto Valli and Davide Ribolzi have worked on the design and the construction of the dark sabers, creating models aesthetically and functionally appropriate to the characters. Fabrizio Fenner has made them blazing and colorful thanks to the rotoscoping, a long-lasting technique which requires an obsessive precision. Here is the interview.

Roberto Valli: In 2006 I took part as an extra in the prologue of Volume 1 and met Angelo Licata. However, I didn't have a sword. After the shooting, I decided to create my own sword. Then I asked Davide Ribolzi, owner of an authomatic metal turning company and a dear friend of mine, if he could help me. As the trial version of the swords had a good outcome, I asked Angelo if they could be good for Volume 0. He was immediately enthusiastic about the proposal and after that, it all began.

2- Can you tell us your role within the production?

RV:  As far as I am concerned, Angelo gave me free rein to create the design. I gave full vent to my imagination. The most important thing I cared about was that the swords were easy to handle. For this aspect, I received many compliments both from the stuntmen and from the actors.

DR : As far as I am concerned, I deviced Roberto's draft under a specific point of view: the modular programming. Each sword is divided into 5 parts which, thanks to the numerical control lathes, is screwed and created, starting from a 40mm aluminium bar. Even the blade is a 16mm aluminum tube (in order to make the rotoscoping process easier). After that, some parts can be anodized for the final colouring.

3- Can you tell us, what in your opinion has been the director's most difficult request to fulfill?

Well, the biodroids'sword certainly gave us a lot work to do. It was pretty hard. Basically, we had to follow the vertebrae of a true living being...

4-Tell us a personal, funny and meaningful story in short, a special moment at your choice while you were working on DR.

RV: When I played as an extra in Volume 1, I dragged my wife with me (she played a role as well). Unexpectedly, the shooting day took place right on our first wedding anniversary. Last year, we created three swords for the Battle of Eron. Once again, Angelo started shooting on the day of our anniversary. I didn't dare to ask my wife again to come for the shooting...

DR: I remember my astonishment when I saw the official trailer of Volume 0 with Thor whirling our swords: everything seemed so much “handcrafted”, the final effect was so much realistic that I could hardly believe it!

5- What do you think about Dark Resurrection?

One word: "Fantastic!" It's like Hollywood taking place in Italy!

6- Did you invest a lot in terms of time cost, why did you do all this, as it was only a non-profit project?

Taking part into a project like this, inspired by the world of Star Wars is the dream of every fan of the saga, a dream come true! That's it! Moreover, meeting and being surrounded by people like you with such a great enthusiasm, is one of the reasons why we have decided to carry-out this project. Special thanks to Angelo Licata for have given us this chance.

7- Would you like to tell us something else about it?

Roberto Valli: Off course! Do you believe me if I tell you that I don't have my own sword yet??

8-Fabrizio Fenner, besides having played one of the most leading roles in Volume 0 and even if you can't tell us anything about it right now because the movie hasn't officially come out yet, in Vol.0 you have also carried-out one of the most delicate post-production jobs: could you please tell us what exactly does it consist in?

FF: In this project I worked on a wide range of special effects: specifically, I dealt with the creation of the bright blades for the lightsabers (as well as for spears and daggers), for the fight scenes of DR Vol.0. In particular, I used a type of technique called "rotoscoping", whose purpose is to create a portable matte box, in order to overlap it to the real aluminum blades used while shooting. The software used for this purpose, that is After Effects, allows you to create different layers, so that you can easily overlap them to the images in which the "core" of the blade is drawn. After that, there is the positioning of each frame, one by one, according to the specific position of the blade in the video. It's a long and painstaking job, which requires a lot of dedication and patience. However, sometimes when you have to create, for instance, a blade which doesn't have a specific or real position in the movie, you also need to combine your intuition togheter with your imagination. Actually, for this purpose we used only the handles without the mast representing the blade.

9-Can you show us a couple of pictures and then a short tutorial? 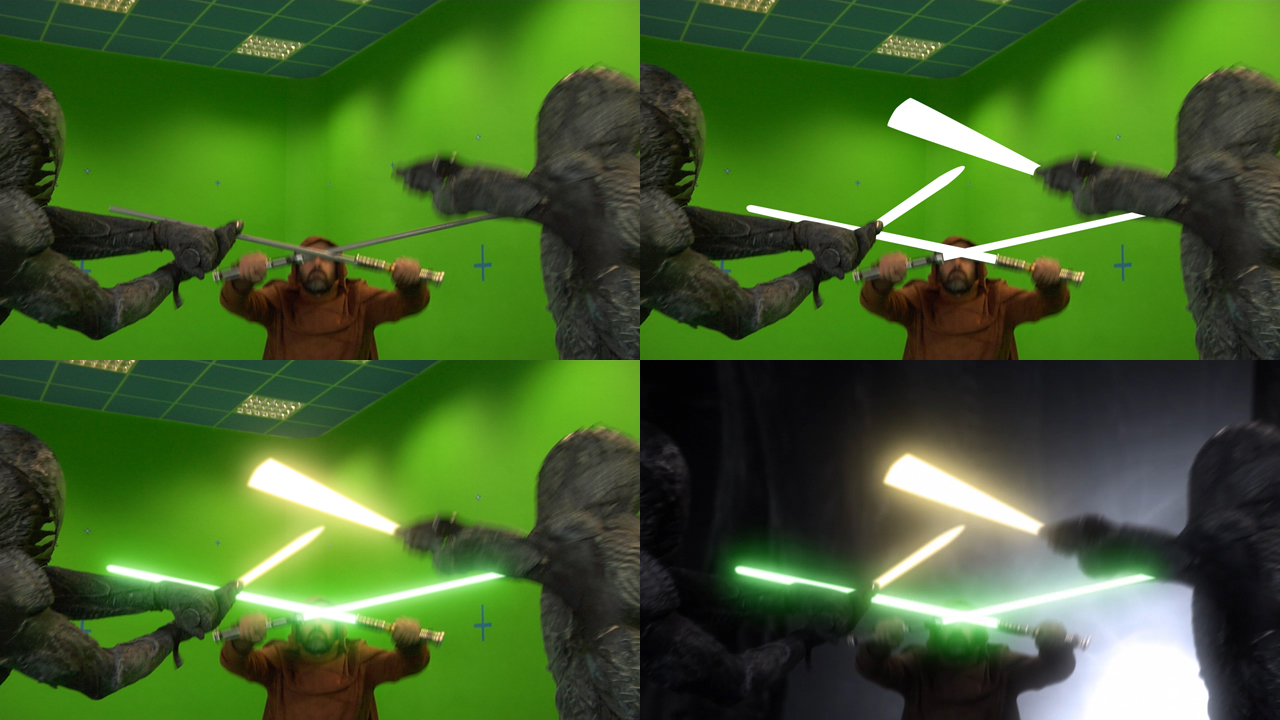 10-Did someone else help you?

FF: Of course, in this titanic enterprise Mila Mirenghi and Riccardo Antonino (with his cooperators) have helped me. Thanks to this opportunity, they discovered how challenging a job like this can be.

FF: In June 2009 I started rotoscoping for the movie and finished in March 2011....considering also some periods during which the post-production stopped working, roughly, I would say that it took almost a whole year of work to complete the ten minute laserblades fighting scene.

11- What do you think about the project of Dark Resurrection?

FF: If it didn't exist, we'd have to invent it!! For me it's a dream come true, the fulfillment of my hidden desires, an adventure which gives a meaning to my life....in a nutshell: a reason to live!

12- Why did you work so much without receiving money?

FF: Money?...c'mon! People would have to pay to take part in DR! Joking aside, in part I have already answered to it in the previous question. Getting into this project, has been so much rewarding to me in terms of personal satisfaction, that things like hard work, stress or strain don't mean anything, compared to the final outcome. Dark Resurrection is not only a fan movie, but also something going beyond the mere film production. It's pure magic created on the set by those who have taken par to it. It's a kind of magic which has permeated everything. Thanks to this experience and to the passion shared for the same project with other people, brand-new friendships were born.

13-Woud you like to work again on Dark Resurrection?

FF: Off course I would! So, when do we start again?